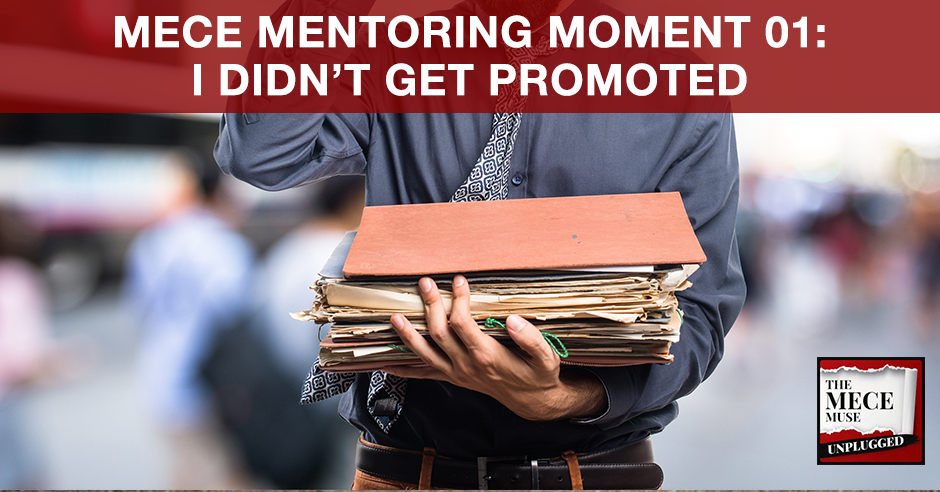 MECE Mentoring Moments is a new segment of the show where I publicly respond to a fan’s email for real time career coaching. In this interlude, I answer a fan’s email about not getting promoted based on a discussion in episode 3.

Listen to the Episode Here:

It’s bench week here at MECE Muse Unplugged, which in consulting lingo means downtime in between projects. I go into that a little more detail with this episode. I recently got an email and it made me rethink some things. I’m going to call it a podcast interlude. I want to introduce a new segment to the show that I’m going to call MECE Mentoring Moments. What is MECE Mentoring Moments? It’s essentially when I respond to questions that I get directly from you, my go-getter fans. I was super excited. I got a couple of emails and some responses to the episodes that I put out to date. I’m a big proponent of just-in-time, real feedback. In my mission of being the mentor that I wish I had, it’s important for people to get that just-in-time feedback as soon as possible, particularly when it comes to a career choice.

In that spirit, I saw the email. I decided I didn’t want to wait until a future episode to answer the question. I’m pretty sure there may be others with some of the same types of questions, so it made sense to publicly respond back to the email and put out this interlude. Hence, this new segment. The email I got was referenced back to episode three in which my guest Aija and I was giving feedback to one of my mentees about the fact that she didn’t get promoted this year. Within the feedback provided her, we talked about her sticking it out for a couple of reasons. If you’re wondering what I’m talking about, check out episode three. It’s the AMA interview with myself and Aija.

One of my go-getter fans is Lewis. Thank you so much, Lewis, for listening to The MECE Muse Unplugged. Lewis writes, “Christie, I love your new show. The scenario in episode three hit home because I also didn’t get promoted to the next level as I expected. Unlike your mentee, I don’t know what my future career plans are. I’m still trying to figure that out. I don’t know if I could go another year after what happened at year-end a couple of months ago. Any other advice is welcome. Thank you. Lewis.” When I saw this email, a couple of things come to mind for me. Lewis, this is going to be a quick mentoring moment here, but I want you to think about three things specifically.

The first recommendation I’m going to give you is reframing your mindset. Sometimes when we get news we don’t want to hear or we hear something that happened, in that moment, it can cut deep. I totally get that, especially if you’ve been working hard, getting ready for a promotion and it doesn’t happen; that sometimes happen. My first recommendation to you is reframe your mindset. The fact that you’re still talking about it, it’s still fresh, it’s still hurtful. In order to do a reset, you’re going to have to change your perception of things. When we’re in that state of mind, all our decisions, all of our actions are going to reflect our state of mind. You start to carry that and then you start to carry career baggage and you start to create a residual feeling about what happened at year-end.

I know it’s totally fresh for you, it just happened a couple months ago, but in order for you to move on and figure out what your next steps are, particularly because you’re not sure what your long-term career plans are, reframe. It happened. It sucked. I totally get that. At the same time, you want to think about things in a positive spin and start to reshape and make sure you don’t go into future scenarios with that feeling. That feeling, that’s frustration, it’s anger. It may be denial depending on where you are in that stage, and nothing good comes from that place of being.

Two, I’m going challenge you to own your experience. When I read your email, it talked about what happened to me. Things happen to us all the time. It happened to me as well. Things always happen to us, but you have to make sure you’re focused on taking ownership. What was the feedback you got? What were the things that your leadership said you needed to do better? It’s been a couple months. Go back and take a look at what was shared. If you need to schedule time with your leader, schedule time with your career counselor or advisor, schedule that time and get that feedback. Sometimes it’s helpful for us to be able to take a couple of days or so or months, take time to let the feedback sink in of what happened.

I know you don’t provide any details. It sounds like you’re in a very hurtful space. I say take ownership of that. Take ownership of your career. It’s not about what happened to you, it’s about what you allowed to happen. Think about what is it that you’re going to do now? What is it that you need to improve on? What are some of the feedback? Is it something with peers? Is it deliverables-related? Is it something specific with a client scenario? Figure out what the lessons learned are because what you don’t want to do is be in the state and saying what happened and constantly putting the onus on others. I know with promotions, there are a lot of other factors. There are a lot of variables that’s at play sometimes. Without much context, I’m going to challenge you to own and take accountability for your career and how you respond. It’s not what people do to you; it’s how you respond to it.

The third thing is it’s a good moment to reevaluate. You mentioned you don’t know what your future plans are. What’s your short-term plan? I get that you may not know what you want to do in the next three to five years, but what is it that you want to do in the next three months? The next six months? The next nine months? Take time to figure that out and start to put the motions in place to put those things in action. For me, if I’ve ever had any setbacks in my career, I don’t take it lightly. I don’t play victim. I say in my mind, “What is it that I need to do to get better?” I’ve been obsessed. When I get super focused, I really take massive action to make sure that I’m never put in a certain type of scenario again. Think about the short-term plan. Forget about long-term right now. Think about what is it that you want to do, what type of experiences you need to get, and start to put an action plan around the feedback that you received at year-end.

My last thing, what are you in a rush for? You mentioned you’re not sure what you want to do. I know you’re upset about being promoted. Taking out the feelings, what would a promotion have gotten you today that it wouldn’t be able to get you next year? I challenge you and anyone else, any of my other go-getters out there that may be in this scenario, reframe your mind. Don’t take that baggage with you because nothing good comes from it. Own your experience. Get the feedback. Figure out what you’re going to do. Take massive action. Create the action plan of how you’re going to move to the next level and enjoy the ride. I get the biggest breakthroughs in my life and my career when I have setbacks. It’s now to the point that I leverage it as a muscle. If I have a setback, guess what? I’m coming back two-fold force. Look at it that way. Again, it’s your life. It’s your career. Own it.

With that, ladies and gentleman, it wraps up my first MECE Mentoring Moment. We’ve got our upcoming episode where I talk being in Bench Week. I’m looking forward to speaking to you then. Until then, here’s to your journey to greatness.